The Stranger is a novel written by Albert Camus.

The original language is French and it was written in France in the early 1940s. Later it was published in 1942. Albert Camus was one of the most famous writes of the 20th century. The original title is “L'Étranger”. The primary setting of this novel is Algiers, Algeria during the French colonization in the mid-1940's. In the book we can see that the younger generation is especially pessimistic about the French presence in Algiers. It is a philosophical and existential novel of the genre crime drama. The Stranger is based on Albert Camus's theory of the Absurd. It is about a young man working for a shipping company. In The Stranger, Camus presents a man that due to external circumstances will be lead to commit a crime.

Mrs. Meursault's, his mother's, death is announced by telegram. He doesn't know the exact date of her death so he just says “My mother died today. Or maybe yesterday” (page 3). When you read the first line it seems like the book is a journal or a diary. In French it is: “Aujourd'hui, maman est morte. Ou peut-être hier, je ne sais pas.” It is a phrase without much emotion. Meursault seems to be unaffected by his mother's death which shocks his entourage. He doesn't seem sad. At the funeral he smokes and doesn't shed a tear and is completely and extremely cold. The day after the funeral, he goes to the beach with Marie Cardonna who used to work at his office. After that they go to the movie theater to see a comedy when he is mourning. During chapter 3, he becomes friends with an offender called Raymond Sintès, his neighbor, who was in a relationship with an Arabic girl whom he mistreated. Meursault gives a false testimony in favor of Raymond who beat his mistress because he accused her of having cheated withour proof. In Chapter 6, Meursault and Marie are invited by Raymond to spend a day at the beach with friends. During a walk, he met the brother of the mistress. Raymond has problems with the brother of the Arabic girl who stabs him under the eye after a fight in front of Meursault and they go. Raymond and Meursault return to the beach and Raymond gives his gun to Meursault. He takes the revolves and goes back to the beach house with Raymond. After a while he decides to go back to the source because it is too hot and he sees the two Arabs. Another conflict arises but this time it is between Meursault and the Arabic. Blinded by the reflection on the Arabic's knife, the protagonist shoots him with Raymond's revolver. He shoots one time, waits and then shoots another four times on the victim. The first shot is evoked indirectly, as if things had happened independently from himself. Meursault, rather than suffer his fate decides to take charge. Rather than being a victim of the absurd, he decided to openly reiterate four times. He is arrested.

In the court he shows no regret for having killed the man. When he is asked why he killed him, he just replies that it was because of the glaring sun that was beating down upon him. He is like absent from his trial, he can rarely permitted to say what he want to say, he is a stranger to the society. Céleste does his best to defend Meursault but he fails completely and doesn't bring much information expect that he was his friend. During the interrogation, the court realizes that he had just lost his mother. here is a certain claustrophobic atmosphere in the court due to the heat and the journalists. Given his insensitivity and indifference to the death of his mother the court is offended and he is condemned to the guillotine. He is condemned because he didn't cry at the death of his mother.

Meursault is the main character. He is a pied noir who lives in Algeria during the colonization. A pied noir (French meaning “black foot”) is a person of European origin who lived in Algeria during the French rule and went back to Europe after the French rule. In the first part of the novel, he is impulsive and remorseless. He considers religion to be meaningless. He is also kind of a psychopath. He is mostly passif during the novel and even accepts to marry Marie just because she wants to. He doesn't seem to have a father. Céleste is the manager of a restaurant frequented by Meursault. The Director manages the asylum where his mother was interned. Thomas Perez is an asylum companion of Meursault's mother. He was her like her boyfriend or fiance. Marie Cardona is Meursault's office colleague and girlfriend with whom he swims with just after the death of his mother. Salamano is an old man living on the same floor as Meursault. He beats his dog but panics when he disappears. Raymond Sintès lives in the same building as Meursault, because of whom he will end up in prison. Masson is Raymond's friend, he indirectly took part in the events occurring on the beach. A group of Arabs come at a time of transition between the first and the second part.

Meursault is the narrator and the story is written in the limited first person through him. It contributes to our understanding of Meursault and it gives us a complete view of him. He doesn't try to understand other characters but observes them. He only tells his own thoughts and perceptions. Therefore, we are not getting the whole story. At first glance he seems a little evil but he is actually just not as attached to life as most people. He isn't very affected by emotions or relationships and just goes with the flow, always taking the easy way out. He wasn't even trying to be evil when he killed the Arab man. It wasn't an act of malice. “My nature is such that my physical needs often get in the way of my feelings” (page 65). He is misunderstood and his actions are seen as immoral. He often feels like life is not worth living and yet does not commit suicide or want to commit suicide. He also thinks that how or when he dies is not important as long as he does die.

A motif is an object or an idea that repeats itself throughout a literary work. One of the motifs in The Stranger is that all the characters have different views of death and decomposition. Salamano likes his scab-covered dog even though it is kind of disgusting and Meursault doesn't show any emotion after his mother's death even though the society he lives in thinks that grief is extremely important as it is part of the French and Christian values. Meursault is not really on trial for having killed an Arab man but for not respecting French and Christian values. Truth is also a motif. Meursault is constantly honest, even when his answers are viewed as immoral or cruel. He never shows any emotion that he doesn't feel, he refuses to pretend that he believes in God and religion even if that is what would have been socially acceptable. Another motif in this book is the constant watching and observation made by the characters. The Arabs watches Raymond, Meursault watches the woman at Celeste's, all these things reflect our search for meaning in life.

A symbol in The Stranger is that Meursault is frequently affected by the sun and his attitude changes according to the weather. Another symbol is the courtroom that symbolizes society. The court's search for a rational explanation as to why Meursault killed the Arab man is an example of people trying to find a rational explanation to an irrational act. The crucifix is also a symbol. It represents everything that Meursault does not believe in as he rejected it twice. Once with the magistrate and once with the chaplain. Irrational actions is one of the main themes of this novel. Some examples of Meursault's irrational actions are his decision to marry Marie and to kill the Arab man. The second theme is that Albert Camus seems to think that human life has no ultimate purpose and that the world is meaningless. At first Meursault is scared of the execution and tries to find a way to avoid it but he realizes that he will die anyway, whether he is executed or not. He is, in fact satisfied with his death. The third theme is destiny. In this novel we can see that every human being is responsible for his own actions, his own decisions and the consequences that follow. The last theme is the physical aspect of life. Meursault is more interested in his physical and tactile experiences and aspects of life, like the weather, the sun, swimming and having sex with Marie than the emotional or social aspects of life. The harmful effects of the sun's heat, light and sweat focus on the face of Meursault.

Why does Meursault believe that the hot sun is a good excuse for killing the Arab man? Why is The Stranger divided in two parts? What effect does it create? How does Meursault change from the beginning to the end of the book? Why did Meursault feel the need to rebel against conformity? 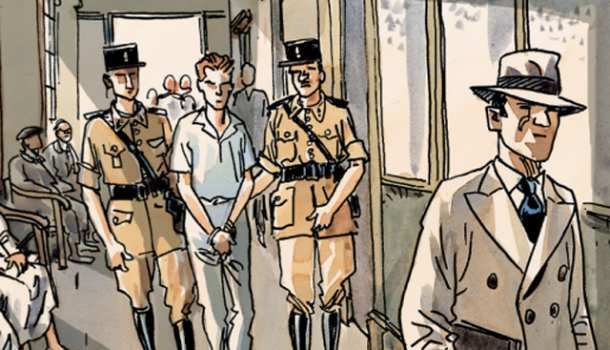 The dubious cost of sexual assault in Japan
Pages